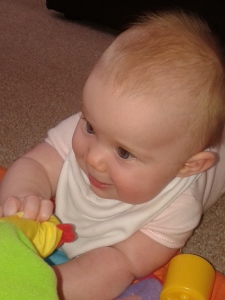 A little over a year ago I wrote a post entitled ‘It’s not that we’re not Interested, but…’ There it is still-March 3rd, 2013, a slight rant about the way people eulogise over their children and worse, their grandchildren. I hope I made it clear enough that this is not a grudge or a phobia regarding children themselves. Indeed, I have been fortunate to have two children of whom I am in awe regarding their achievements. They have made it to respectable adulthood and [almost] gainful employment. I am duly proud and delighted to know them.

In addition to all this, I made my living from attempting to stuff skills and knowledge into the little sponge-like brains of numerous children from the seventies to the noughties, so I am not in any kind of position to harbour a hatred of the young. I somehow gained a reputation for cynicism during those years-more a reaction to new initiatives than to the bright and bushy tailed little ones in my care.

I have also now become a fully paid up member of the grandparent club. As a granny I am as doting, besotted, amazed and devoted to my granddaughter as any grandparent anywhere. She is, of course the most beautiful, talented, cute, lovely and intelligent being that ever appeared on the Earth, just as all the other grandchildren are. But the wonderful event that was her birth was actually six months ago and I have refrained, until now from pontificating on the joys of her existence. Why? Because, reader, I don’t wish to become a hypocrite on the matter of grandparentage, having made my opinions on the matter clear in March 2013. I simply don’t want to morph into a drooling baby-bore, starting every conversation in a desperate bid to lead it onto the subject of my progeny. They can speak for themselves [or will in the case of GD].

What I do feel, however is some concern in respect of the world she is to grow up into and the fact that all the problems it has faced in the past remain with the addition of extra difficulties such as climate change. She will need to be intelligent, sociable, knowledgeable and educated to deal with the challenges of the future and luckily is getting ahead already. She is lucky. She is born to educated, loving parents and getting the best start anyone could wish for.

I hope I can be the kind of granny she will remember with fondness. I am excited to think of all the activities we will be able to do together as she grows. I wish for her to grow up with a respect for the environment, a love of nature and tolerance and friendship towards fellow humans of any nationality, religion and philosophy.

That’s all I’m going to write about the personal side of being a grandparent. Her achievements will not be mine. Got to be true to my principles!

In my semi-conscious, post celebratory state I felt I must be hallucinating. Each time I turned on a screen to attempt to catch up on current affairs, the same, confusing, surreal images and words flooded the waves, hour in, hour out in a relentless deluge. Babies. Crowds. Photographers. The news was…no news. She was in labour. She was still in labour. She went into labour on Monday morning. There was still no news. Would it be a girl? Would it be something else?

After what seemed like days [no doubt the Duchess herself felt it to be so], the announcement of the baby’s arrival was made, taking up hours more of the news broadcasts. Then there was more speculation-when would she be leaving the hospital? The massed ranks of reporters and photographers were in a frenzy of feverish speculation and excitement. Clearly nothing else had occurred in the world since Kate went in to pop out a sprog. I presume the loyalist, ‘Hello’ reading nation took a day off, stayed indoors, drew the curtains and glued themselves to their screen while they waited, breath baited for the thrilling moment when the Cambridges would emerge with their offspring.

At long last, and I’m guessing after having been groomed, styled, primped, made up and dressed by a post-partum designer, the Duchess and husband appeared with their wrapped bundle of baby-a tiny, screwed up face in a swathe of blankets. There were a few, bland remarks about parenthood-then they were off in their swanky Range Rover [or something], driven by someone.

The next round of intense build-up concerned the name [much exploited by the turf accountants of this world]. Charles was favourite-then James-then…

Then all was quiet, except, perhaps in the Cambridge household.

I suppose the Royals must generate an amount of tourist income. Other than that there seems little purpose, especially for the periphery-the ‘hangers on’; the likes of Charles and Camilla, Andrew [who, under his designation of ‘trade ambassador’ appears to do little except to play in a middle Eastern playboys’ playground involving some unsavoury entertainment with young girls]. In the meantime, we, the proletariat fund it all through tax. If this sounds mean spirited, I make no excuse-I feel mean about it.

I am sure the Queen herself feels she has served the nation, and in her own way she has. And yes, a lot of people feel affection for her and her batty, eccentric husband. Perhaps it is all part of their appeal. But their upkeep is all monstrously expensive. I wonder if the return justifies the expense? Answers on a postcard please…or in the comments?