The weather has turned gloomy and drizzly as we leave Unterager and head towards Italy. Lake Lucerne is shrouded in mizzle, its frame of snowy peaks almost obliterated. 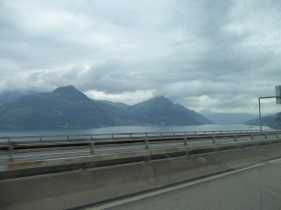 We drive through the St Gotthard tunnel, waiting in line for our batch of vehicles to get a green light [presumably this is to avoid jams inside the tunnel]. Then it’s a short hop to Lugano, which holds a promise of stunning views as we travel through the pretty town and suddenly we are alongside the lake itself, adorned with intriguing towers, villas and churches. A quick glimpse and we are winding up hairpin bends, through tunnels and the border is upon us, vestiges of the old controls still there in the customs sign and the checkpoint. 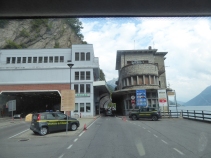 The weather brightens and soon we are driving into Porlezza, our first stop in Italy, a large site on the shores of lovely Lake Lugano. 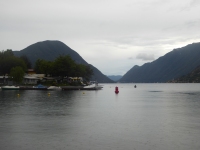 The town is a tiny, little known gem, with narrow, cobbled lanes against a backdrop of steep cliffs, a miniature square, a little church painted with frescoes on the walls and ceiling, bars and cafes along the waterfront, where I’m surprised to see a terrapin swimming alongside the ducks! 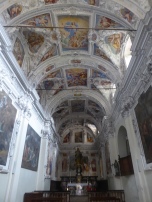 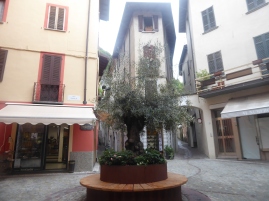 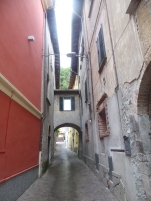 Rain sets in overnight and for half the next morning, before clearing enough for us to set off on along an old railway track turned cycle path towards Menaggio at Lake Como. As it’s a rail track we think the gradient can’t get too steep and to begin with it isn’t, leading off through the back of town and along the side of pretty Lake Piano, a nature reserve. 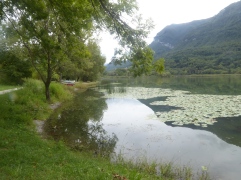 The track climbs-and climbs. It becomes a relentless, knee-numbing challenge. We are overtaken by the inevitable E-bikes, prompting teeth-gnashing and finger gestures [from ourselves of course]. I begin to run out of gears. At last we reach the top and begin the descent, during which my hands become numb from holding the brakes on. We come to an abrupt halt at a road which snakes down in hairpin bends into Menaggio and I decide that’s enough, since mixing with Italian traffic on steep bends is not my cappuccino.

Then it’s back up again; up and up, and more up.

The next day is to be devoted to Lake Como. We’ll drive to Menaggio and get a ferry across to Bellagio. Easy! But there is nowhere to park a van along the steep sides of the lake and we don’t find a car park until we reach Cadenabbia, which is ok because the ferries cross from here. 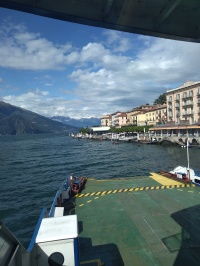 Bellagio swarms with tourists, its steep, narrow lanes lined with designer outlets and gift shops. But it is pretty and worth the effort. After a wander up and down the streets and an ice cream we return to Cadenabbia to drive up the lakeside and find a site. Easier said than done!