The first time we visited Portugal was with a tent, a giant, swish ‘pyramid’ tent that we’d borrowed from Husband’s colleague. I had to crawl in and hold the central pole, getting hot and sweaty while Husband hammered the pegs in outside. On a site at Ancora [north Portugal] where an interested neighbour ‘advised’ us on where to have our doorway, we pitched under some sap-dropping trees that stained said tent for ever, resulting in our having to buy the colleague a brand new pyramid tent when we returned. [We’d also torn the fabric attempting to dry it out in a French motorway services car park]. 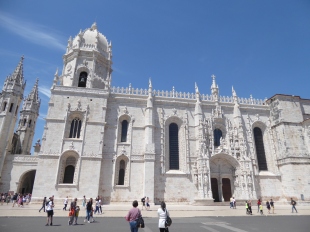 This was also the trip when we visited Porto by train from Viano do Costelo, buying return tickets and discovered on our return to the station to get back, that the train ‘does not return from here’. We had a wonderful, dockside meal and returned on a ‘milk’ train, from a different station at about 2am.

Mostly we’ve found the west coast to be more pleasant and less developed than the Algarve, but there are exceptions.

We find Lisbon much changed, with the addition of hideous cruise ships blocking views and throngs of tourists everywhere. Our previous visit was quiet and we were able to stroll the narrow lanes without stepping around selfie-takers. To anyone intending to visit Lisbon and considering an open top bus tour I’d say, ‘Don’t!’ You pay 11 euros to inch along for hours in stifling traffic, a woman wailing Fado songs in your ears. You get to see very little and anything of interest is zipped past or around before you’ve got your finger on your camera shutter.

I can get no purchase on the Portuguese language whatsoever. Spoken, it sounds eastern European with lots of sch, z and cz. Written, it looks remarkably like Spanish and meaning can often be deduced. We know we must take care not to speak Spanish to the Portuguese in spite of so many words being similar, nevertheless Husband is inclined to say ‘gracias’ instead of ‘obrigado/a’ for the first few days. My own knowledge of Portuguese is restricted to ‘obrigado/a’, ‘Bom dia’ and ‘ola’ so it is fortunate that almost everyone here speaks English very well indeed.

The Portuguese are fond of tiling the outside of their homes, which can look beautiful or tawdry; railway stations, hotels, churches-no building is safe from this treatment.

And neither are the bone-shaking, tooth-grating streets, which are tiled in cobbles.

The Portuguese countryside is strewn with cork oak trees, the cork continues to be harvested and goods such as cork handbags can be seen in the shops. Perhaps the backlash against plastic will see a resurgence of the cork industry? It does seem to be a versatile material with useful properties: lightweight, water repellent, attractive.

In recent years, wildfires have decimated much of Portugal’s forests and evidence of this is everywhere.

Orange and lemon trees abound, in gardens, parks and along the streets. They are all hung with tons of fruit which nobody seems bothered to pick, the ground around the trees littered with fruit just as the plums lie fallow in Gloucestershire.

Before using the [very quiet] motorways you must register your bank card and attempt to forecast how much toll you will be using, which is tricky. Otherwise you can register at the first ‘portagem’ [toll booths] but then you’ll have no clue as to what is being deducted.

We’ll soon be leaving Portugal and crossing back to Spain-but I’ve no doubt at all that we’ll be back!

We are at the end of our first camper-van trip of this year, an odyssey very much unplanned that took us to Portugal, Spain and France, depending on where the weather was best according to the forecast.

Unlike the many who rumble around the roads of Southern Europe in search of sunshine we have not succumbed [yet] to a satellite dish to give us the evening diet of TV that we would get at home. Ideally we would be near enough, when parked up to access a lively bar or two but circumstances don’t always work out this way and we are sometimes left with the choice of books, internet [if it is available] or local TV. Failing all this I am forced to write!

We are at the mercy of Portuguese, Spanish or French TV programmes; most often their news bulletins or the equivalent of our ‘BBC News 24’. While we are adequately equipped linguistically in French to inquire the whereabouts of the nearest ‘boulangerie’ etc neither Husband nor I have more than the sketchiest idea of what is going on in Spanish, less still Portuguese, so the results of our viewing are often confusing and down to guesswork using pictures and the running text along the bottom of the screen.

All this gives a sense of what it may be like to be a young child learning to decipher the squiggles and symbols of words when learning to read and makes you realise how crucial the pictures are as an aid. While I like to think it is improving my linguistic skills I somehow doubt this is the case, since we’ve no idea whether our guesses are correct.

One excellent benefit of watching other countries’ news is that the angle is no longer at UK degrees, the world does not revolve around our own country. At home, even world issues will only be dealt with from a UK viewpoint. The Alpine air disaster item will focus on any British passengers, a climate summit will centre on our own delegate; grim beheadings will be given scant coverage unless the victim is British. Elsewhere in the world the focus swings to their own delegates, victims or disasters. Here is an aspect of that broadening of the mind that travel is supposed to offer.

Another advantage is missing a huge chunk of tedious UK election coverage broadcasting which, judging by the un-edifying glimpses caught since our return has been a blessing. From the quality of their baby-kissing to their stance on pot-holes, is there any pebble left undisturbed in the relentless unearthing of new stories about the opposing politicians?

And what can they possibly write, spout, blog or tweet about once the entire circus has left town? They must be praying for a heatwave/earthquake/alien invasion-otherwise it will be back to road congestion and house prices.